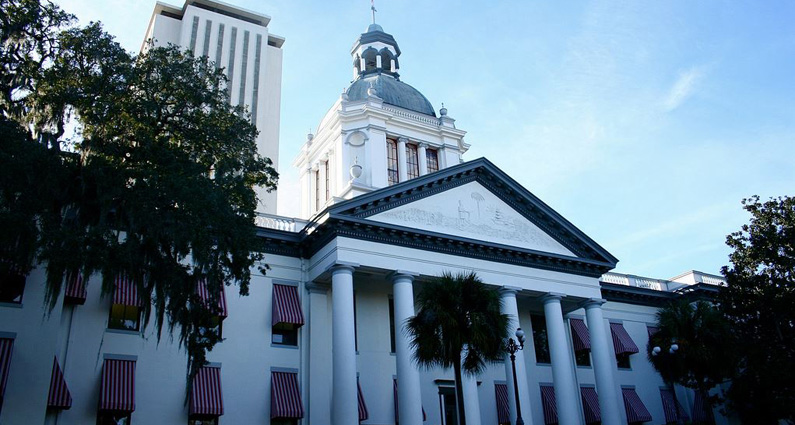 The best way to show legislators that animal protection is an important issue is for animal advocates to communicate with their elected officials. Legislators do care what constituents (voters) think about issues. After all, elected officials generally want to be re-elected, and that means adequately addressing matters important to their constituents.

Please contact your state senator and state representative, let them know you are a constituent and ask them to support the bills described here (you may want to address only one bill or issue in each letter or phone call).

Are you confused by the legislative process? Click to learn How an Idea Becomes a Law.

The 2021 Legislative Session begins on March 2.

More than 65 cities, towns and counties across Florida have banned the retail sales of dogs and cats, but a state law would be more effective than a patchwork of local ordinances!

Helping dogs stuck at the end of a chain
Senate Bill 650, introduced by Senator Annette Taddeo, and House Bill 177, introduced by Representative Emily Slosberg, would require that dogs chained outdoors be attended and supervised at all times. Unattended chaining is bad for dogs. Dogs confined on chains are at risk of becoming tangled and injured, and are often exposed to bad weather. Chained dogs are much more likely to become aggressive.

Nineteen Florida counties have banned unattended dog chaining. It is time for a statewide law!

“Allie’s Law” is named after a dog whose abuse was recognized by a veterinarian but never reported.

The black-market trade in wildlife threatens the future of many species of Florida animals.

Defining “Adequate Shelter”
Senate Bill 1122, introduced by Senator Jason Brodeur, and House Bill 731, introduced by Representative Elizabeth Anne Fetterhoff, would create a statewide definition of “adequate shelter”– including proper space and ventilation, and protection from rain, heat or cold– as a minimum standard that owners of animals would have to meet.

A clear definition of “adequate shelter” would make it easier for law enforcement and animal control officers to act to protect animals suffering in cramped cages or extreme heat.

Courtroom Animal Advocates
Senate Bill 1316, introduced by Senator Jason Pizzo, and House Bill 1003, introduced by Representative Sam Killebrew, would allow advocates– attorneys or trained legal interns– to argue on behalf of an animal in court hearings. The advocate would represent the interests of an animal and provide information and recommendations to the judge.

This important bill would give animals a voice in our court system.

Have you ever spoken to your state senator or state representative? Whether you meet in person or speak on the phone, you could urge your state legislators to support a specific proposal, or simply let them know how important the issue of animal protection is to you.

To win victories for animals, ARFF will need your help during the legislative session. Click here to be added to ARFF’s email list to receive legislative alerts and updates.