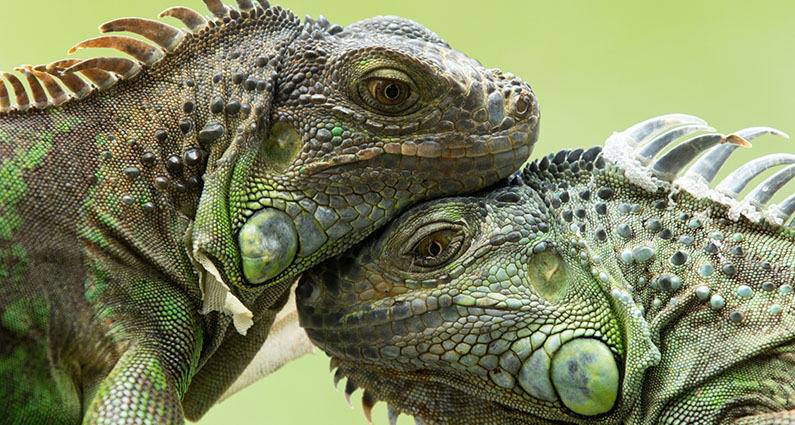 Green iguanas were a fad pet years ago. Unfortunately, many escaped or were abandoned after becoming too large or expensive to care for. There are now thousands of the green lizards throughout south Florida.

Although most people find these animals fascinating, iguanas do sometimes create challenges for Florida residents. The most frequent complaint is that they eat ornamental plants, such as orchids or hibiscus. Iguanas can also cause problems when they dig holes for nesting. But iguanas are not known to pose a threat to native wildlife (iguanas are primarily herbivorous) and they normally avoid people.

Iguanas are protected from cruel treatment under state law.

Green iguanas are not native to the United States, but they have thrived in Florida for many years and are most likely here to stay. Green iguanas were introduced into Florida’s environment as a result of inadequate regulation of the exotic pet industry. Please ask the Florida Fish and Wildlife Conservation Commission to stop the retail trade in iguanas and other exotic animals.

Iguanas communicate through head bobs, displaying their dewlap (the flap of skin that hangs beneath the neck), and with other body language.

The social life of green iguanas is just as complex as birds or mammals. Young iguanas often stay near their brothers and sisters for months after emerging from their nest, grooming and sleeping near each other. Studies have shown that young iguanas protect each other from predators, sometimes by covering their smaller siblings with their own bodies.

Although commonly called “green iguanas,” members of this species range from bright green in color to orange to grayish brown. Iguanas change color as they age. Iguanas can also change their color during breeding season.

Green iguanas can grow to six feet in length and live for more than 15 years!

Although Green iguanas– as with all wildlife– can sometimes pose unwelcome challenges, there are humane methods of discouraging iguanas from becoming “nuisances.”

• Do not feed iguanas. Feeding only encourages animals to stick around.

• Make your property less iguana-friendly by planting landscaping that iguanas will not eat such as citrus, crotons or any tough, thick leaved plant. Plants can also be protected using chicken wire.

The pet industry imports thousands of iguanas into Florida each year. Contact the Florida Fish and Wildlife Conservation Commission (FWC) and urge them to ban the import, breeding and sale of iguanas as pets in Florida. Contact the FWC through their website.