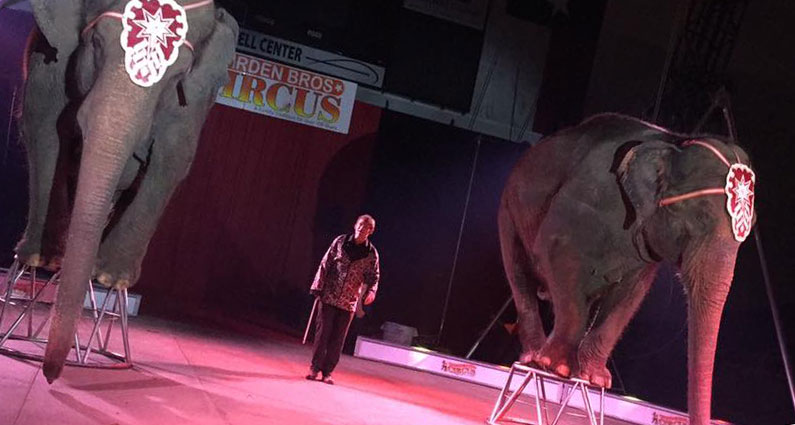 Richard Garden, his sons Lance, Niles and Zachary, and businesses they’ve owned and operated, have a sordid history.

In 2020, the Garden family is operating under the names Garden Bros. Circus and King Cole Circus.

May 2019: The Enumclaw (Washington) Expo Center terminated its contract with the Garden Bros. Circus after the circus failed to pay rent on time.

April 2019: Families demanded refunds after several advertised acts were cancelled at a Garden Bros. Circus performance in Marshfield, Massachusetts. The town police chief told a local newspaper that the circus manager failed to deal with the complaints, “That manager was less than helpful, he was angry, swearing and stated that they don’t give refunds. We were put on the phone with an alleged owner, who might have been calling from Florida, and he was just yelling and screaming and swearing at the police.”

April 2019: Performances of the King Cole Circus in Havre and Kalispell, Montana were cancelled without explanation.

April 2019: Attendees at performances of the King Cole Circus in Farmington, Utah complained that the circus was not as advertised. Despite the circus promising camel and pony rides, acrobats and motorcycle stunts, none of that happened. “The circus was fraudulent,” one woman told local TV news after bringing her family to the circus.

March 2019: In what has become a pattern of behavior, the Garden Bros. Circus promoted shows in Phoenix, Arizona before securing a contract with the venue. People who had purchased tickets to the shows had difficulty getting refunds.

March 2019: The New Jersey Division of Consumer Affairs warned the Garden Bros. Circus that its advertisements for shows in the state may violate New Jersey’s Consumer Fraud Act by promoting elephant rides and other animal acts prohibited in the state.

May 2018: “BBB urges parents to do their research with free circus tickets” — that was the headline of a news report about a Garden Bros. Circus appearance in Hilliard, Ohio. The Central Ohio Better Business Bureau alerted the public that the circus has an F-rating with the BBB.

September 2017: Performances of the Garden Bros. Circus in Winnipeg, Manitoba were cancelled due to safety concerns. Customers complained about overcrowding and a damaged circus tent. Firefighters called to the scene refused to declare the tent safe.

September 2017: After observing Libby and Bunny, two Asian elephants traveling with the Garden Bros. Circus, elephant expert Dr. Philip K. Ensley concluded that the elephants are suffering. Dr. Ensley wrote following observations at two performances of the circus in June 2017, “Both Libby and Bunny demonstrated rote non-species typical behaviors during their performances, suffer physical injuries, inhabit intolerably restricted spaces and are subjected to a travel and work schedule that is inhumane by any standard.” Click here to read Dr. Ensley’s full report.

August 2017: According to a complaint filed with the USDA by People for the Ethical Treatment of Animals (PETA), a former Garden Bros. Circus employee witnessed “routine abuse, neglect, and public endangerment by the circus’s manager and animal exhibitors.” The whistleblower reported elephants tased and beaten by handlers, and the abuse of camels, a llama and other animals traveling with the circus.

July 2017: In what has become a pattern, the Garden Bros. Circus failed to meet permit requirements and did not perform with animals during its stop in Rio Rancho, New Mexico.

June 2017: Despite advertisements promoting elephants and other animals, Garden Bros. Circus shows in Minneapolis and Little Falls, Minnesota did not include animals because the circus failed to obtain required permits.

March 2017: The Garden Bros. Circus abruptly cancelled performances scheduled in Bridgeport, Connecticut after discovering that the venue was not zoned for live entertainment. The circus continued to advertise shows in nearby Danbury, but apparently without the agreement of the venue.

February 2017: A scheduled performance of the Garden Bros. Circus in Lowndes County, Georgia was cancelled because the county refused to issue the necessary permits after determining the circus’ safety record involving animals and the public was “not satisfactory.”

July 2016: The King Cole Circus, a new circus owned by Richard Garden, launched its first tour in North Carolina. But after performing in just two cities, the circus suddenly ceased operations and announced online, “All scheduled performances have been cancelled.”

October 2015: Toby Tyler Circus (Richard Garden) canceled several shows in Tennessee without notice. WSMV Ch. 4 interviewed one disappointed parent in McMinnville who explained, “There was nobody there, nothing. No circus, no nothing. You could see cars driving by looking for it. It wasn’t there. We had a lot of our friends show up, and they had their daughters crying in their vehicles.”

June 2014: Piccadilly Circus (Zachary Garden) shows cancelled in three Massachussetts towns after the circus fails to provide information required to obtain permits. “The company did not announce the cancellations on its website or its social media accounts,” reported a local newspaper.

April 2013: Zachary Garden cited by the U.S. Department of Agriculture (USDA) for failing to provide veterinary treatment to a female sheep suffering from a fractured leg. The USDA inspector wrote, “A fractured leg is a painful condition. The licensee failed to seek prompt treatment for Bonnie leaving her to suffer.” The inspector also found 17 goats, sheep and other animals crammed into a transport trailer that was too small. “The animals would have difficulty lying down and moving to the water receptacles,” the inspector noted.

October 2012: Piccadilly Circus shows cancelled in Minnesota, North Dakota, Iowa and Colorado. Customers complained of learning about cancellations only upon arriving at the arena.

September 2012: Better Business Bureau of Fort Worth issued a warning about the Piccadilly Circus, noting that it had received “nearly two dozen complaints from consumers in several states about the entertainment company.” Complaints included misleading advertising (circus acts not appearing as advertised) and misrepresentation about the cost of tickets. An article in the Star-Telegram added that “scathing reviews” on Ticketmaster’s website supported the BBB’s warning.

April 2010: Rory Martin, president of the Sarasota County Agricultural Fair Association, told The Jackson Sun that he won’t let Richard Garden back on the county’s property after receiving bad checks.

December 2009: Niles Garden arrested in Florida on a felony charge of “scheme to defraud ($50,000 or more).” According to the Sarasota Herald-Tribune, the charge is related to attempts to swindle merchants and vendors in Sarasota and Tallahassee; the police report cited, “multiple events that were cancelled without notification.”

“The Gardens have also had problems paying their bills over the years. Together they have been sued more than 40 times in Manatee and Sarasota counties, largely for nonpayment of bills. Many of the cases were dropped for ‘lack of prosecution’ after the Gardens simply folded the company being sued.”
– Sarasota Herald-Tribune, December 16, 2009

December 2009: “Cirque-A-Licious,” a New Year’s Eve party in Sarasota, Florida, promoted by Richard and Niles Garden, was canceled less than two weeks before the event.

“Over the last two decades, [Richard] Garden’s businesses have been fined or barred from operating in at least six states. He faced criminal charges for a circus bleacher collapse that injured 70 people in New York, and his companies have been sued more than a dozen times in Sarasota County alone…. Garden’s troubles started in 1984 when Massachusetts, New York, Vermont, Michigan, Maine and other states started pursuing his companies for deceptive practices.”
– Sarasota Herald-Tribune, April 9, 2009

April 2009: Garden Family Shows (Richard and Niles Garden) abruptly canceled an Ice Capades tour in Williams Lake, British Columbia, leaving a dozen performers without paychecks, and a hardware store in town out $1,000 worth of materials that were never paid for.

February 2009: Niles Garden accused by Robarts Arena (Sarasota) of not paying $5,100 rent for a failed home show (the show was shut down on the second morning of the three-day event).

June 2004: Attendees at a Toby Tyler Circus (Richard Garden) show in Jackson, Tennessee complained about misleading promotions (prices were higher than advertised, circus acts promoted on fliers were not part of the show).

August 2002: An animal handler with Sterling & Reid Bros. Circus was arrested for beating an elephant bloody during a performance in Norfolk, Virginia. The handler was later convicted on three counts of cruelty to animals.

“The [USDA] has issued more than 30 pages of violations to Sterling & Reid [Niles Garden] since 1999. And it fined the circus $3,250 in 1999 for general problems. This summer … a Sterling & Reid bear fell out of a moving truck onto a highway. It wasn’t until 30 minutes later, when circus caravan drivers stopped for gas, that anyone discovered the bear was missing.”
– Sarasota Herald-Tribune, November 12, 2001

“The Sterling and Reid Brothers Circus…has weathered a slew of critical reports from the U.S. Department of Agriculture, from cases of physical abuse to consistently failing to provide veterinary plans and keeping exotic cats in cages too small for their natural movement…. Reports cites two instances of abuse—an arthritic tiger forced to perform in spite of a USDA citation against it, and cats being struck in the face.”
– Pittsburgh Post-Gazette, July 18, 2001

June 1988: Authorities in Fairfax and Prince George counties, Virginia, seized dozens of animals, including an elephant and a tiger, part of Richard Garden’s traveling Wonder Zoo, who had been discovered crowded inside truck trailers without food, water or fresh air. Temperatures inside the trailers were more than 110 degrees. To avoid criminal charges, Garden relinquished custody of the animals. The U.S. Department of Agriculture charged Garden with violating federal animal welfare laws and he was fined $12,000. In addition, Garden was prohibited for 15 years from exhibiting animals or doing other business that requires a license under the Animal Welfare Act.

April 1988: An appearance by the Wonder Zoo at a shopping mall in Gainesville, Florida sparked complaints about sick and dehydrated animals. A young elephant traveling with the zoo was sent to the University of Florida for care, but was later euthanized.

April 1988: The Attorney General of Pennsylvania filed a lawsuit accusing Extravaganza Inc. (Richard Garden) of raising money “through the use of misleading and deceptive solicitation pitches.”

April 1988: New York Attorney General Robert Abrams asked the state Supreme Court to find Richard Garden in civil and criminal contempt for failing to pay court-ordered fines, restitution to charitable organizations and refunds for canceled performances. “Richard Garden flagrantly ignored a court order which my office obtained as part of its ongoing efforts to protect the public and the many worthy charities which are harmed by fraudulent operations such as the Toby Tyler Circus,” said Abrams.

January 1988: The State of Maryland filed a lawsuit against Richard Garden alleging he had violated Maryland’s charitable solicitation law.

July 1987: Richard Garden agreed to terms of a court order barring him from ever again doing business in New York state.

October 1986: The State of Wisconsin filed a lawsuit against Richard Garden alleging that the Toby Tyler Circus deceptively represented its ticket distribution practices.

June 1986: Bleachers collapsed at a Toby Tyler Circus performance in Greenport, New York. 68 people were injured. Richard Garden was arrested on numerous charges, including assault, reckless endangerment and criminal nuisance. He later pleaded guilty to six counts of assault and was fined $6,000 and ordered to pay $10,000 in restitution.

1984: United Funding was permanently banned from the state of New York for violating fundraising laws.

If you care about animals, don't go to the circus!

If you learn of an upcoming performance by the Garden Bros. Circus, please contact the event host and sponsor(s) and politely ask that they reconsider their support of the circus. Let them know that you don’t support businesses that support cruel circuses.