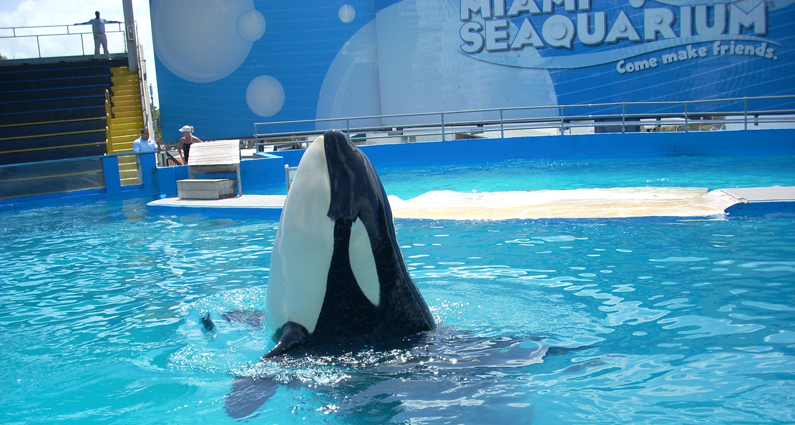 Florida is the birthplace of, and still the biggest player in the marine park industry, with 12 attractions and hundreds of captive marine mammals, more than any other state.

From the Panhandle to the Florida Keys, the scene is familiar: large crowds cheer as splashing orcas leap through the air for a handful of fish, dolphins are ridden by human performers as if they were water skis, and sea lions wave to the audience on command. Employees at marine parks like to tell audiences that the animals wouldn’t perform if they weren’t happy, and until now this assertion has gone largely unchallenged. But as news gets out about traumatic captures, barren concrete tanks, high mortality rates, and aberrant – even dangerous – animal behavior, people are beginning to realize that hidden behind the dolphin’s “smile” is an industry built on suffering.

Adapting to an alien world
In the ocean, orcas and dolphins live in large, intricate social groups and are always on the move, swimming up to 100 miles a day. They spend only 10 percent of their time on the water’s surface and can dive to depths of hundreds of feet.

In captivity, orcas and dolphins are confined to tiny enclosures that make it impossible for them to engage in natural behaviors. A concrete tank, regardless of its size, is an abnormal environment for a whale or dolphin. These intelligent animals are forced to swim in endless circles, or spend their time simply lying motionless on the surface of the water. Instead of chasing live prey, they eat dead fish dumped from a bucket.

The orca “Lolita” (pictured above) has lived in the same barren tank at the Miami Seaquarium for 45 years. The tank– just 35 feet wide by 80 feet long– is the smallest for an orca in North America. The tank does not meet the minimum dimensions required by the federal Animal Welfare Act. Lolita lives a solitary life. This highly social animal has not been in the company of another orca since 1980!

ARFF would like to see Lolita released back into the waters of her birth. Lolita was captured from the waters of Washington State. Her mother and extended family still live there. Marine mammal experts have proposed a plan in which Lolita would be transferred to a coastal sea pen, and, once she re-learns the skills necessary for survival, be reunited with her family in the wild. (Even if it is determined that Lolita is unable to recover from the years spent alone in a tank, she deserves to live as natural a life as possible.)

Thanks, but no tanks!

Fortunately, for marine mammals, more and more people are becoming concerned about the suffering of captive marine mammals. People are speaking out loudly that dolphins and whales belong in the ocean. You can help end the misery of marine mammals imprisoned in marine parks and aquariums by refusing to visit them, and by educating your family, friends and co-workers.