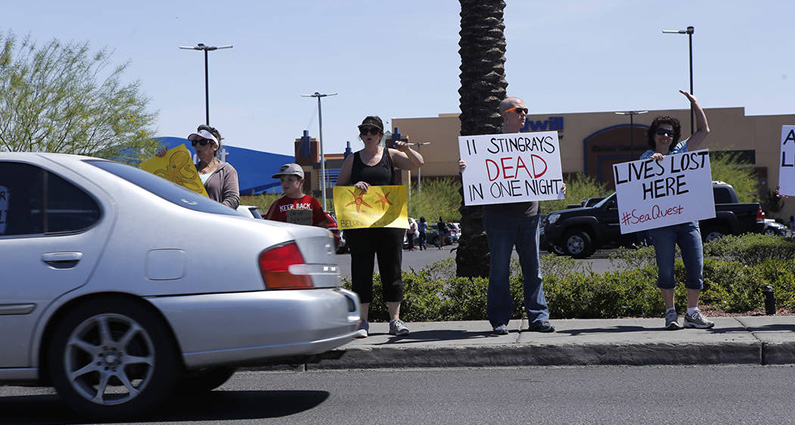 Last week, the Galleria at Fort Lauderdale announced that it is partnering with a company called SeaQuest to open an aquarium at the shopping mall in late 2018. According to a press release, the new aquarium will feature “hands-on encounters” with sharks, stingrays, capybara, otters, tortoises, and exotic birds. (photo: an animal rights protest outside SeaQuest’s aquarium in Las Vegas in April 2017)

SeaQuest CEO Vince Covino, and his brother Ammon, have a long history of legal problems and controversies surrounding animal care.

The majority of saltwater fish and invertebrates found in aquariums are captured in the wild because they are difficult to breed in captivity. The collection of large numbers of fish and other animals for the aquarium trade is harmful to the reef ecosystem.

The touch tanks and other ‘hands-on encounters’ planned for SeaQuest Fort Lauderdale put animals and people at risk. Touch tanks in which animals are unable to escape constant harassment from people can severly stress the animals. Bacteria introduced to touch tank water by human hands can be harmful to animals. (Children have also developed bacterial infections after handling animals in touch tanks.)

You Can Help
The Galleria mall is steps away from a state park and the Atlantic Ocean, and a short drive from the Everglades. Instead of exploiting captive animals for profit, the Galleria mall should be celebrating the unique natural areas in its own backyard, where animals can be observed in their natural habitats. Please contact the Galleria and urge them to reconsider the addition of an aquarium at the mall: