Why aren’t those calves with their mother?

An article in Saturday’s Palm Beach Post about Larson Dairy, one of Florida’s largest dairy farms, included this photo of dozens of young calves, confined individually in small wire hutches covered with a piece of fabric for shade. Why aren’t these calves with their mother? Because humans are drinking her milk! 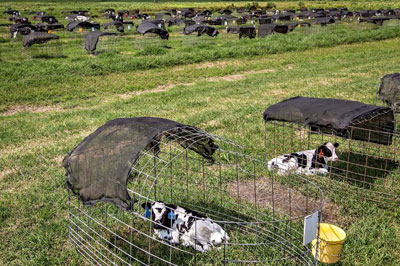 On large dairy farms, calves are taken from their mother shortly after birth and fed artificially. (Female calves are raised as “replacements” for adult cows who are sent to slaughter when their production declines.) The calves spend the first weeks of their lives cut off almost completely from contact with other cows. Not all calves survive the stressful, unnatural, forced separation from their mother.

When ARFF visited a Florida dairy farm we found one poor calf dead and covered in flies inside a wire hutch. A video of the disturbing scene can be found on ARFF’s YouTube page.

The Palm Beach Post article did include some good news: Milk sales are declining! Among the reasons, “Soy, almond, and rice milks and other alternatives are cutting into market share.”

Visit ARFF’s website to learn more about the dairy industry.

“We are urging Gov. Scott not to waste state funds to promote alligator products,” said Don Anthony, ARFF’s Communications Director. “The State of Florida should not be in the business of marketing the meat and skin of this unique Florida animal.”

On alligator farms in Florida, thousands of these magnificent animals are killed each year. Farmed alligators often live in dirty, crowded, unnatural conditions in concrete or metal tanks. Disease is commonplace, and slaughter is inhumane.

A copy of ARFF’s letter is available upon request.

This is why steel-jaw leghold traps are illegal in Florida

Yesterday, an Animal Control Officer in Port St. Lucie rescued a raccoon who had been caught in an illegal leghold trap. The poor animal’s front paw had to be amputated (a report by Fox 29 News features a photo of the raccoon’s horrific injuries).

In 1972, Florida banned the use of steel-jaw leghold traps, but they are still widely used by trappers in other states to catch raccoons, coyotes, bobcats and other fur-bearing animals. When an animal steps on a leghold trap, the trap’s jaws slam closed on the animal’s limb. The animals efforts to escape often lead to serious injuries.

If you ever hear someone defend trapping as humane, or if you’ve ever considered purchasing a coat with fur trim, please remember the sad photo of this raccoon.